The Making of a Volunteer Firefighter 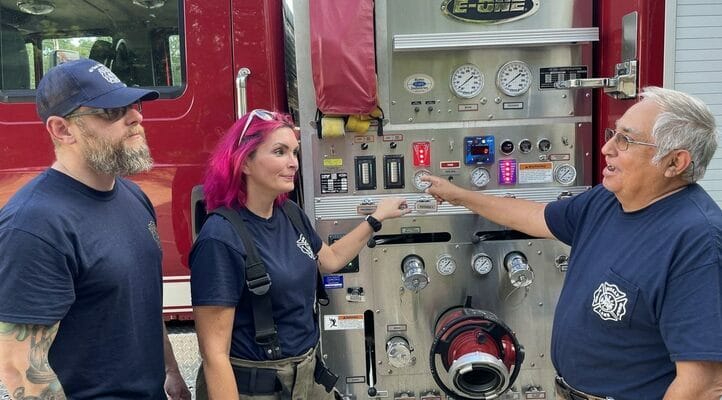 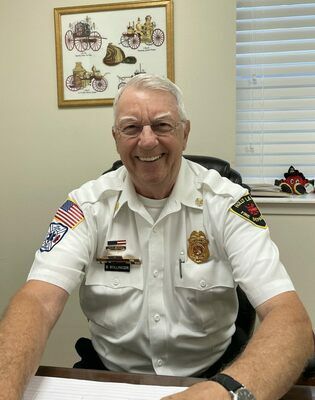 On a Saturday night in October 2006, Bill Bollinger and his wife Jean walked into Holly Hall to play bingo, a regular Holly Lake Volunteer Fire Department (HLVFD) fund-raiser now held at the fire house. A few rounds of bouncing balls and half-filled bingo cards later, Bill walked out of the hall with an application to volunteer as a firefighter.

“Travis Rattan, Jerry Hibbs and Leon Ward (all firefighters back then) were at the event, raising funds for the department,” said Bill. “They pitched me on the idea of volunteering, and after discussing it with Jean, I decided to apply.”

Today, Bill is HLVFD’s fire chief, overseeing a team of 16 volunteers willing to drop everything at the sound of a pager and leap into service.

“I was already retired when we moved here in 2004,” said Bill, who grew up in Canton, Ohio, where he met Jean on a blind date. The two married and moved to Washington, D.C., where Bill worked in the government printing office for 15 years before transferring to Dallas.

Jean taught at a charter school. After 21 years in the Metroplex, they were both ready to exit the “rat race.” They discovered Holly Lake Ranch visiting friends, and within a few weekends, decided to make the move.

In his 16 years with the department, Bill has risen through the ranks, completing his six-month probationary period in May 2007 and attending the Texas A&M Forest Service firefighting course in College Station to earn his firefighter accreditation.

“The department picks up the tab for all recruits who qualify for the training,” Bill said.

From there, he served the department as a water tender, riding the company tankers, and continued learning and serving through the ranks of lieutenant, then captain, then assistant chief. He was voted in as chief after Chief Joe Cirasola passed away in May 2020.

Chiefs serve one-year terms, from January 1 through December 31, and are elected annually by active volunteers. Joe served five years as chief; Bill took over in June 2020.

“I can’t imagine anything that makes you feel better than volunteering as a firefighter,” Bill said. “It’s tough, serious, exciting, fulfilling and very rewarding all at once.”

Jose Benavides seconds that thought. As a veteran firefighter assigned to the tender division, he supervises water supply for tankers. He further serves as quartermaster in charge of consumables, uniforms and safety equipment, as well as treasurer, keeping the books, paying bills, depositing donations and overseeing audits.

Jose joined the department in September 2018, after moving to HLR from Keller, Texas with his wife, Denise, when he retired from the Federal Aviation Administration as an Aviation Safety Inspector.

“There’s never a dull moment,” said Jose, who claims he’s still surprised at what awaits him when his pager goes off. “Mostly, we get medical calls and vehicle accidents during the day, but at night, it could be anything. You never know what you’ll be called into. This requires constant training on all aspects of firefighting.”

Volunteers train every Tuesday on various aspects of department operations; Jose leads many of the sessions. Among the regular participants is Andi Tanti, who joined the department last December. She moved here in September 2021 when the software implementation firm she worked for in Allen, Texas reduced its workforce because of the pandemic.

“I immediately felt a bond with the community and wanted to give back,” she said. “It was either the fire department or the dog shelter, and I’d rather put out fires than break my heart over homeless dogs.”

Andi started in the tenders division on water support, while working through the chapters of Firefighter I, an online course covering communications, knots, ladders, hoses, fire science, extinguishers, and search and rescue. “The more I learned, the more I was attracted to fire suppression,” Andi said. “But you can’t be a firefighter until you’ve completed the A&M course.”

The one-week course is held every July and March, with graduates qualified to respond to structure and vehicle fires. (By the time you read this, Andi will have become certified.)

Michael Crawford is the newest department recruit. He and his wife, Lyndsey, moved to HLR from Fort Worth in July 2020. Michael is part owner of a 90-year-old California-based nutriceutical company called Vitaminerals that sells to chiropractors. His role as president affords flexible hours working from home.

“The house we bought here was formerly owned by Al Murfin, a volunteer firefighter himself,” Michael said. “I grew up in Jersey City, New Jersey, where my grandfather was a firefighter, so I always respected those in service.”

Within weeks of moving in, Michael asked his neighbor, Bobby Churchman, what organizations he should explore to fit in on the Ranch. “Bobby didn’t hesitate. He suggested the fire department. Lyndsey thought it was a great idea.”

Michael passed his background check and immediately started attending fire house meetings. New recruits must attend four consecutive meetings to demonstrate commitment, before being voted on for full induction. Michael was voted in on July 5th, 2022. He’s now studying online for firefighter school and will have to shave his beard before he attends A&M next March.

“There are lots of ways to volunteer,” said Chief Bollinger. “You don’t have to wear a helmet and fight fires to enlist. You can work in administration, communications, finance, fund-raisers, operations or serve on the board. Just show up. We’ll find you a place.”

If you’ve been looking for a way to serve your community, look no further. Bingo! HLVFD needs you!